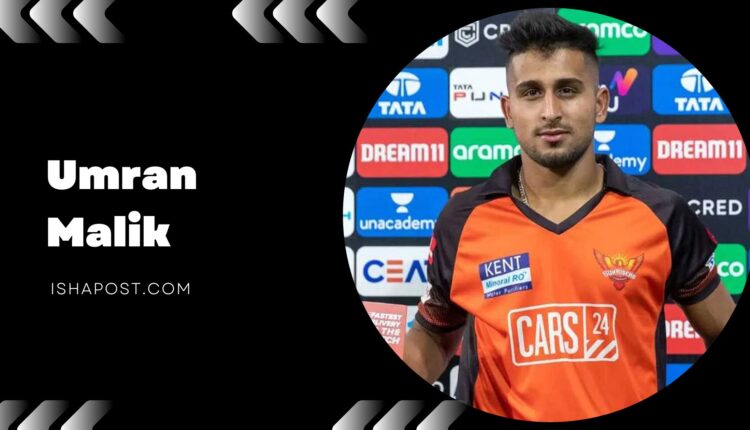 Fast bowling is one of the toughest things to do in cricket. Your body remains under constant pressure and stress in this trait. But still, players want to bowl fast and win matches for their teams. Many premier fast bowlers have graced the world stage of cricket such as Zaheer Khan, Ashish Nehra, Javagal Srinath, and many more.

The newest member to join these ranks is Umran Malik. In this blog, we will discuss Umran Malik’s biography, age, cricket career, and stats. This will provide a chance for his fans to connect with him more.

Who is Umran Malik?

Umran Malik is an Indian cricketer. He was born on the 22nd of November 1999. As of 2022, Umran Malik’s age is 22 years. He played for Jammu & Kashmir state team in domestic cricket. And in the Indian Premier League, he represents Sunrisers Hyderabad. He is a right-arm fast bowler and he gained his name in the game for his raw pace. Although he is yet to make an appearance for the Indian national team, he is already making rounds of discussion among cricket experts to be selected for the team.

In the 2021 Indian Premier League (IPL), Umran Malik’s IPL career started as a net bowler when he was selected as the net bowler with two other players in April 2021. He was then declared as a replacement for T. Natarajan, who had to leave the team for a short Covid -19 break. His big break came during the 49th match of the 2021 Indian Premier League when he made his debut in the IPL, against Kolkata Knight Riders on 3 October 2021. In the same IPL season,  he bowled five balls in a row at more than 150 Kmph during the match between Sunrisers Hyderabad and Royal Challengers Bangalore. This single brings a lot of limelight to him. In the 2021 ICC Men’s T20 World Cup  As a result of his fast bowling he was named as a net bowler for India’s team.  On 23 November 2021, He made his first-class debut, against South Africa A for India A. In the 15th IPL season, he won the title of  Emerging Player. In the IPL 2022 auction, He was retained by Sunrisers Hyderabad.  For the series against South Africa, Malik was named in India’s Twenty20 International (T20I) squad In May 2022.