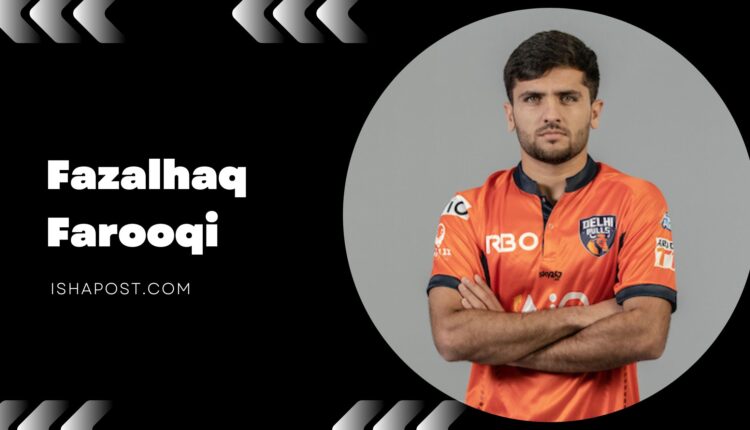 top from Afghanistan to become the leading cricketers in the world. They inspire younger generations to be involved in the game of cricket. Fazalhaq Farooqi is one such cricketer who is encouraging youth to hold bat and ball and gain fame.

In this article, we will read about the famous Afghani cricketer, Fazalhaq Farooqi’s biography, age, career, struggle, stats, and many more. This article will give an important insight into his career to his fans. Let us start reading.

Who is Fazalhaq Farooqi?

Fazalhaq Farooqi is an Afghan cricketer. He was born on the  22nd of September 2000. As of 2022, The age of Fazalhaq Farooqi is 21 years. He is a Right-handed batter and he bowls Left-arm fast-medium. He is famous for his lethal bowling. In international cricket, he plays for the Afghanistan national cricket team. In the Afghanistan domestic cricket circuit, he plays for the team of Amo Region. In March 2021, He made his international debut for the Afghanistan cricket team. He is one of the few players from the Afghanistan team who is playing for a franchise in IPL. In the Indian Premier League, he represented Sunrisers’ Hyderabad team.

On 13 November 2017, in the 2017–18 Ahmad Shah Abdali 4-day Tournament, He made his first-class debut for Amo Region. In the 2018 Ghazi Amanullah Khan Regional One Day Tournament on 10 July 2018, he played his first List-A match for the same team.  In the player auction for the 2022 Indian Premier League tournament,  he was bought by the Sunrisers Hyderabad.  In February 2022. He was bought at a base price of INR 20 Lakh.

Is Your Digital Wallet Safe? 5 Tips to Protect Your Online Payments