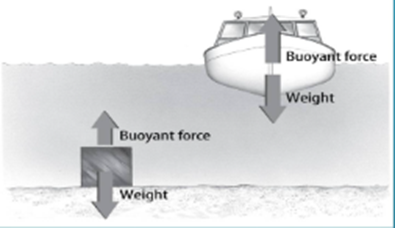 The buoyant force, or upthrust is an upward force that is exerted by a fluid opposing the weight of a partially or fully immersed object. It is the tendency of an object to float in a liquid or fluid. An object submerged partially or fully in a fluid appears to lose its weight as a result of the buoyant force. Buoyancy takes place due to the differences in pressure acting on opposite sides of an object immersed in a static fluid.

The buoyant force is affected by the following factors:

When an object is submerged in water or any other liquid, we can observe that the object experiences a force from the downward direction reverse to the gravitational pull, and thus is responsible for the decrease in its weight. This upward force used by the fluid opposes the weight of an object submerged in a fluid. The pressure in a fluid or water column increases with depth. Thus, the pressure at the bottom of an object immersed in the fluid is more than that at the top. The change in this pressure results in a net upward force on the object, which can be defined as buoyancy. 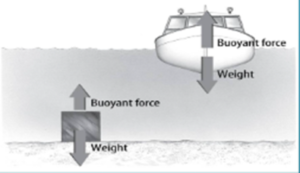 When we immerse an object in a fluid, an upward force can be accomplished by the object. The liquid applies this force on the object, which seems to rise, and this is called force buoyant force. The magnitude of this force is precisely equivalent to the amount of weight of the liquid replaced. 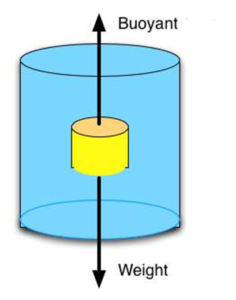 Buoyancy(upthrust) makes it possible for fishes, ships, swimmers, and icebergs to stay afloat. Some of the applications of buoyancy are discussed below.

A ship floats on the sea surface because the volume of water moved by the ship is enough to have a weight that is equivalent to the weight of the ship. A ship is built in a way so that the shape is empty to make the overall density of the ship that is lesser than the seawater. Therefore, the buoyant force acting on the ship is huge enough to support its weight.

A certain group of fishes uses the Archimedes principle to go down and up the water. The fish will fill its swim bladder with gasses to go up to the surface. The gasses spread from their own body to the bladder and thus it makes the body lighter. This will help the fish to go up.

Why does an object float or sink in water?

The pressure at the bottom of the liquid happens to be greater than at the top. This is because as we go down in the liquid, the number of layers of the liquid that are overlying increases. On account of the difference in the pressure between the layers, there tends to be a made-up force that leads to the acceleration of the object that has been submerged in the upward direction. The force is always in the vertical direction. In other way, it can be said that the magnitude of the upward force is equal to the difference in the pressure of the topmost and the last layer and equivalent to the weight of the fluid displaced. Therefore, the object floats.

Simpletech Reviews: Check This Site is Authentic or a Scam

Is Your Digital Wallet Safe? 5 Tips to Protect Your Online Payments

Tips To Build Your Presence As A Teacher

10 Commandments In Order – For New Christians