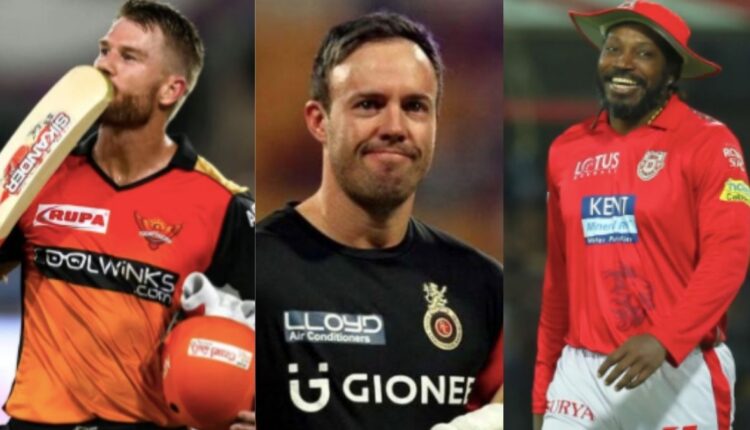 IPL does not need any introduction as it is considered the festival of cricket all around the world. People of India treat cricket as a religion. IPL is officially known as the Indian Premier League is the most fierce competition in T20 cricket. All the top players of the Indian Subcontinent take part in the tournament and make it a success. Apart from it, IPL hosts top players from other countries also. All the dangerous batsmen, Superfast fielders, and fierce bowlers can be seen in the tournament. The list of the most dangerous batsmen in the IPL is very long.

IPL was started in 2007 and it is in the 15th edition in 2022 but the popularity of the tournament is increasing every year. Millions of people around the world tune into the TV sets and Cricket stadiums to enjoy the game of extremely competitive cricket.

Top 10 Most Dangerous Batsmen in The IPL History Of Indian Premier League:

Virat Kohli: The former all-format captain of the Indian national team comes first on the list. Apart from his debut season, he never performs badly in his career. He performs madly in every tournament. He was most successful in the 2016 edition, in the 16 matches he scored 973 runs.

AB de Villiers: Ostensibly one of the most capable batsmen in cricket history, AB de Villiers. is the deadliest, IPL has ever seen. With an imaginative batting style, and the capacity to win matches without any assistance, Mr. 360 keeps on being one of the top batsmen in IPL even at 37 years old.

David Warner: David Warner is positioned as the best IPL batsman ever. While every other batsman played almost 200 IPL matches, Warner scored 5449 runs in only 150 matches. Sunrisers Hyderabad selected David Warner as its skipper in 2015. David Warner drove the group to their first IPL title beating Virat’s RCB in the last match. David Warner has generally been their top-run getter. Warner has won three orange caps which is the most in IPL. Warner, subsequently, is one of the IPL best batsmen ever.

Chris Gayle: The man, the beast. Chris Gayle has changed T20 cricket like anything. His IPL career began in mediocrity. He was unable to make a big deal in the early seasons. In 2011, he went unsold, and yet RCB marked him between the competition to replace Dirk Nannes. What we saw in that tournament is regarded as a “Gayle storm”. He won the orange cap in 2011 and 2012 IPL. In 2013, He scored the highest score in T20 history of 175* against PWI.

Suresh Raina: For CSK, Suresh Raina was essentially significant as MS Dhoni. He was the highest run-scorer in IPL history for quite a while before Virat Kohli outperformed him in 2016. Without winning a solitary orange cap, Raina has been a huge match player for CSK. He went unsold in the 2022 IPL season. But still, he is a part of the IPL as a commentator.

Shane Watson: Shane Watson is one of few Australian cricketers who had a long IPL profession. Started for Rajasthan Royals in the debut IPL season in 2008. Watson was purchased by CSK in 2018 and the world saw Shane Watson at his absolute best. The 117 from 57 balls in the IPL 2018 final against SRH was one of his best T20 innings of all time. The Australian star all-rounder is the two-time Player of the Tournament (2008 and 2013).

Gautham Gambhir: The hero of India’s 2007 T20 World Cup and 2011 World Cup wins. He was not downsized in the IPL. Gautam Gambhir was exceptionally persuasive for KKR, thriving for a long time with the bat and with his captaincy. He stacked up 4217 in his 11-year profession. His greatest years were for KKR where he came out on top for two championships in 2012 and 2014. With incredible consistency and the capacity to play critical innings in enormous matches, Gautham Gambhir is one of the best India has ever produced.

Kieron Pollard: Kieron Pollard has been the knight for Mumbai Indians in every IPL tournament he played. Starting around 2010, Paltans’ beloved Polly has seen the team sail and sink. He was a middle-order batsman. The Trinidadian won a sack brimming with games that were not even close to their bend. The team has never considered leaving him from the crew at any closeout. With a strike rate over 150, Pollard has stacked up 3234 IPL runs in 12 seasons.
Also Read: Sukesh Chandrashekhar – Age, Parents, Bio, Wikipedia, Net Worth, And Relationship

MS Dhoni: MS Dhoni has turned into an IPL legend ever since the Indian Premier League has hit the floor. He was the longest-serving captain of an IPL team. Known as the sensational finisher, Dhoni has a sum of 4684 runs and remained not out on a mind-blowing 71 events. He is a calm and cool character. He handed over his captain duty to fellow Indian player Ravinder Jadeja In the 2022 season.

Rohit Sharma: The only player in history to come out on top for six IPL championships. Rohit Sharma has been the most valuable player for Mumbai Indians. Since taking over the captaincy from Ricky Ponting in 2013, Mumbai brought home a championship at regular intervals. With the bat, there’s nothing Rohit Sharma can’t do. 5556 IPL runs and 6 IPL championships are not something every person can achieve in the world.

Most Dangerous Batsmen in the IPL Of All Time:

Ogpush com – Is It Real, Free Robux Maker, And Is it Free?