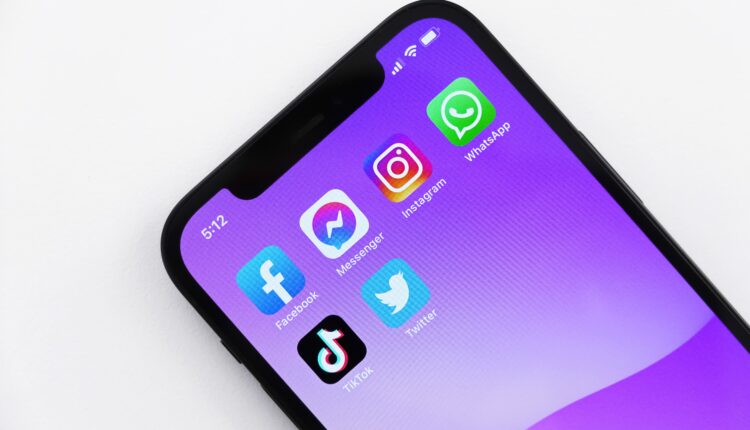 4.48 billion people were active on Social Media in 2021. It’s easy to make connections with people busy on Social Media. Now which Social Media platform is suitable for making connections, promoting your brand, or marketing your business based on customer survey? That’s the real question which I will answer now. These people use social media, and celebrities also use Social Media to earn huge money. Let me share an example to clarify my point.

You may know Cristiano Ronaldo, a famous footballer. He charges Millions of Dollars to share a single sponsored post on Instagram. Big brands approach him to market their products or services because this footballer has billions of followers. If any celebrity’s net worth is low, he’ll charge less. So that’s a clear point that Social Media has excellent exposure. Every brand has made a Facebook Page because they know that they can attract more audience on Facebook. So different platforms can be used, and we’d list the 5 Best Social Media Apps For Android 2022.

Endless Social Media apps are present, but we want to mention only 5 because you don’t need any other app when these apps are installed on your Android Phone. So let us reveal the names of the 5 Best Social Media Apps For Android 2022:

There is no need to install any other Social Media app when you have these installed on your Android Phone. I’ll review these apps one by one to clarify my point. Of course, you have to read the review carefully to know the app’s suitability.

On Reddit, you can explore the area of your interest. There are subreddits named according to the attraction. For example, let’s say you are interested in watching anime and other cartoon stuff. You get subreddits to explore where anime and cartoon stuff is discussed. You’ll never see things related to Hollywood Movies in that subreddit. That’s the power of using Reddit. You only see whatever you want. Material that doesn’t fulfill your interest is never displayed on Reddit, which is why we ranked this app in the 1st spot.

Reddit displays things according to your interest, but promoting your business-related stuff is nearly impossible because Reddit ignores such items. This platform only entertains the users through its subreddits. If you want to promote your business on Reddit, you need to run advertisements through Reddit, which costs enormous. Using Reddit is also tricky for beginners, but ATOZ APK gives a complete guide. You can download this app and know the pattern of using it. So visit that website to learn the proper guideline.

The 2nd platform which is used by billions of people is Facebook. Big brands like Apple, Amazon, and Google have created Facebook Pages to convey messages to their Social Media followers. Facebook has been the best platform for people of every region. It is available in endless languages, so if people don’t understand English, they can switch to any other language they know.

Promoting your business on Facebook is also very easy and cheap. You can promote your services to make good revenue while spending a lower amount. Facebook ADS is more affordable compared to other platforms like Google Adwords. Also, the audience is more responsive than others. If you want to promote your brand or service, you can use Facebook ADS to attract positive results.

If you only want to view short videos, then TikTok is the platform we’d give a green signal. TikTok became famous after the COVID Pandemic. People were trapped inside their homes when they caught sight of TikTok. TikTok was different from other platforms. Its short videos impressed people because everyone quickly wanted to know the complete details. TikTok’s videos were covering this thing.

Now TikTok is one of the biggest platforms used by billions of people. TikTok offered less money in its struggling days, but when celebrities jumped into this platform, then TikTok offered huge bonuses. People who have more followers can earn good money. TikTok short videos are worth watching if they match your interest. You can follow the people who share the content of your interest.

In this way, TikTok will pitch the content that matches your interest. For example, suppose you are interested in watching short videos about car drifting. Many drifters have made their accounts on TikTok that you have to follow. Once you have followed those accounts, you will only see the videos related to car drifting. That’s what people like about TikTok.

If you don’t want to load your feed with unnecessary stuff, then Twitter is the best platform. Elon Musk showed interest in buying Twitter’s shares, but he failed. Twitter is a platform founded in 2006 in San Francisco, California. It is the only platform giving straight tweets to the people. You can message and make relationships with people on Twitter, but the thing used most by people on Twitter is its “Tweet.”. You can post content or convey any message through tweets.

Every celebrity uses Twitter to convey messages. Even politicians use Twitter to tweet messages to their party or opposition because the message is straightforward. But unfortunately, you can’t load the endless text on Twitter because it has added restrictions. For example, Twitter only allows you to convey notes in a short form. Also, you don’t see the unnecessary stuff like Facebook and TikTok deliver.

If you are interested in politics, you will only see the politics-related stuff. No other tweets related to environmental science and football matches will be shown. That’s why people use Twitter. Everyone wants to see the data of their interest, and Twitter has succeeded in offering this thing.

It is the best platform having a powerful Android App. Moreover, Instagram’s interface on mobile is more beautiful than on desktop. That’s why people from different professions use Instagram on their smartphones. Celebrities from other countries also use this platform. Turkish actors and celebrities only use Instagram to interact with their fans. Overall, it’s the best platform used by billions of people.

So these were the 5 Best Social Media Apps For Android 2022. No one has competed with these platforms until yet. Let’s see how 2023 goes. If any platform exceeds its fan followings in 2023, we will list that platform, but you need to spend your 2022 with these apps. Install any of these apps to enjoy your spare time. With many influencers and organizations relying on these top social media apps as part of their income, it’s notable that these five platforms support biometric security measures for a secure, multi-factor login. Security on social media platforms is imperative for businesses and individuals alike, so it’s important to use apps that place a priority on protecting your data and information.

Should You Buy Tiny Homes in Oregon or Not

The Phoenixwiggers Revolution in San Francisco: Its Impact and Future