The Difference Between White Thai and White Maeng Da Kratom 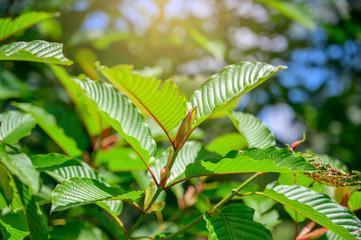 Kratom may be a relatively new herb on our collective conscience. But the plant has already garnered an incredible amount of fame for its immense pharmacological benefits.

Kratom is the common name for a tree botanically known as Mitragyna speciosa. The tree is native to Southeast Asia, including Thailand, Malaysia, Indonesia, Papua New Guinea, and Myanmar. It goes by numerous other names, depending on the region. Common ones include biak, ketum, thang, kakum/kakuam, and thom.

Kratom extracts are mainly prescribed for treating pain and opioid withdrawal symptoms. The herb packs potent alkaloids that produce near-similar effects as regular opioid drugs but lower addiction and dependency risks. Kratom is also a stimulant. The tree belongs in the same family as coffee. That speaks volumes about its potential energy-boosting effects. Other medical issues kratom may treat include mental problems like anxiety, sleep disorders like insomnia, and inflammatory conditions arthritis.

Before we uncover the difference between White Maeng Da vs White Thai, it’s best to explore the similarities shared by these two iconic kratom strains.

The main similarity between White Thai and White Maeng Da Kratom is that they generally produce similar effects. As you may have noticed, ‘white’ appears in both strains. Now, several naming conventions are followed when assigning the various kratom strains their names.

The two key considerations include the strain’s origin and the coloration of the plant’s leaf veins.

Your next question is whether the color differences impact these individual strains’ effects.

The most important thing to note here is that a single kratom tree can have white, green, and red veins on its leaves. It all depends on the growth stage the plant is in. The leaf veins in kratom trees start white before turning green and eventually red.

We’ve already indicated that kratom is native to Southeast Asia. But as you shall find, specific kratom cultivars are more abundant in some countries than others. For instance, Red Borneo is generally more widespread in Borneo Island.

Note that the specific regions where certain kratom varieties exist may considerably influence the strain’s overall effects. That’s because environmental aspects like rainfall, humidity, and soil profile contribute immensely to the impact produced by medicinal herbs.

So, while White Thai and White Maeng Da are both cultivars of White Vein Kratom, extracts obtained from these plants may still deliver distinct effects.

White Thai Kratom traces its roots in Thailand. That pretty much explains the “Thai” reference.

Maeng Da Kratom also originated from Thailand. But unlike White Thai, which is almost entirely indigenous to Thailand, Maeng Da is also reasonably abundant in Malaysia and Indonesia.

Maeng Da has been a common term within the kratom community ever since this herb began to generate international attention.

The strain enjoys more popularity than most other kratom varieties, including White Thai.

Since Maeng Da is considerably more popular than White Thai, it’s intuitive to imagine that the strain is also more widespread. And you wouldn’t be wrong.

Not only is Maeng Da more widely cultivated than its White Thai cousin. Kratom products formulated with this strain are also generally more abundant.

The mechanisms of Demand and Supply dictate that an increase in supply should translate to a corresponding decline in price. As Maeng Da is more widespread than White Thai, it would make economic sense that the strain is also priced significantly lower.

However, this may not always be the case.

Both White Thai and Maeng Da are white vein kratom strains. Ordinarily, these cultivars should produce the same effects.

But remember what we mentioned about the difference in effects based on the specific geographical locations in which a kratom strain is abundant. Besides, there’s no such thing as identical kratom strains.

White Thai is mainly used for energizing and uplifting effects. It can also boost your creativity and provide some mental relaxation.

On the other hand, White Maeng Da is mainly loved for its antidepressant and analgesic properties. The strain may also boost your confidence and energy levels.

There goes our definitive side-by-side comparison between White Maeng Da and White Thai strain. Whichever cultivar you prefer, remember to moderate your consumption. Kratom has been shown to produce certain adverse effects if overdosed.

Factors to Consider before Selecting a Barbershop!

Five Best-Selling Books on Forgiveness that Will Guide You

Rinnai Error Code 12: What it means and How To Fix it