Who Is Cindy McCain – Everything You Need To Know About Her 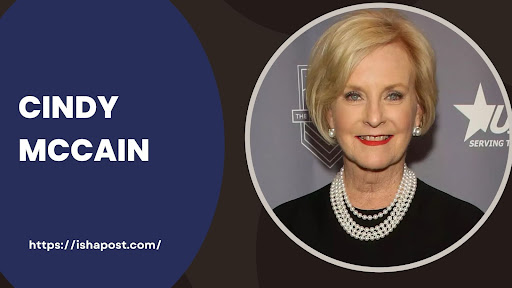 Cindy McCain, an American businesswoman, is one of the most known people in the US, and because of her increasing popularity, people are just wanting to know her in a better way considering that she has made a huge name throughout her career.

If you are one of the many people that are trying to know Cindy McCain then you came to the right place because below we have written down almost every single thing that you need to know about Cindy McCain.

Who Is Cindy Lou McCain?

Cindy Lou McCain, who was born on May 20, 1954, is an American diplomat, humanitarian, and business woman who has served as the Cindy McCain ambassador for the United States of America to the United Nations Agencies for Food and Agriculture since November 5, 2021, and is mostly known for being the wife of the late Senator John McCain, who was the 2008 Republican Presidential Nominee.

McCain was born and raised in Phoenix, Arizona and is the daughter of Jim Hensley, who is a very famous and wealthy beer distributor. After receiving bachelor’s and master’s degrees from the University of Southern California, McCain became a special education teacher.

In 1980, Cindy Lou married John McCain and the couple moved to Arizona a year after, where John was elected to the United States Congress the following year and was re-elected 5 more times.

Here are some of the most important information that you need to know about Cindy McCain:

How Many Kids Did Cindy Lou McCain And John McCain Have?

From the years 1988 to 1995, Cindy Lou founded and operated a nonprofit organization, which is known as the American Voluntary Medical Team. The duties of the team is to organize trips and offer medical help to disaster-stricken or war-torn third-world areas.

The father of Cindy Lou passed away in 2000 and she inherited the majority control and became the chair of Hensley & Co., which is one of the largest Anheuser-Busch beer distributors in the United States of America.

Cindy Lou is an active philanthropist and serves on the boards of the HALO Trust, CARE, the Easter Congo Initiative and Operation Smile.  Cindy is known for frequently making overseas trips to take art in the philanthropist activities that she loves doing. Not only those, but she is also a known to be part of the big fight in human trafficking.

What Does Cindy Lou McCain Do?

Right now, Cindy Lou serves as the ambassador for the United States of America to the United Nations Agencies for Food and Agriculture. She also does some philanthropist activities from time to time.

Here are some information that you need to know about Cindy Lou:

The parents of Cindy Lou are:

Cindy Lou has 2 siblings, who are Dixie L. Burd and Kathleen Portalski.

Not much is known about the siblings of Cindy McCain.

Cindy McCain Net Worth is believed to be anywhere around $100 million to $250 million USD.

Please do keep in mind that she was already wealthy before she met her rich husband and she is the one who got the inheritance of the beer company that her father ran throughout their life.

In the 2020 presidential election, Cindy McCain Maricopa county slammed the senate of Arizona for recounting the 2.1 million ballots in Maricopa county and said that she knows not everyone is happy with the results.

Do you think we missed out on anything important about Cindy McCain? Let us know what we missed out about her by leaving a comment in the comments section below so we can add the missing details right away!
Know more: Know Everything About Miranda Bailey From Gray’s Anatomy And Her Life