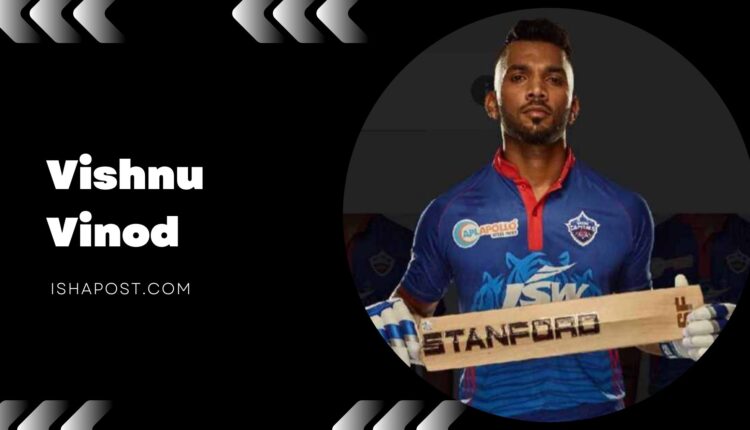 Cricket is the most famous game in India. The Board of Control for Cricket in India (BCCI) is the overseeing collection of Indian cricket and leads every domestic competition and selects the players for India’s national cricket squad and India’s women’s national cricket squad. Homegrown contests in India incorporate the Ranji Trophy, the Duleep Trophy, the Vijay Hazare Trophy, the Deodhar Trophy, the Irani Trophy, and the NKP Salve Challenger Trophy, and The Indian Premier League. All their tournaments have produced many world-class cricketers for India. These players have represented India at different levels of cricket and made India proud. Vishnu Vinod rightfully falls on that list of cricket.

In this blog, we will learn about the fan-favorite cricketer, Vishnu Vinod. We will focus on every aspect of his life such as biography, age, education, cricket stats, ranking, and teams. Let us know about Vishnu Vinod in detail.

Who is Vishnu Vinod?

He was born on the 2nd of December 1993. As of 2022, Vishnu Vinod is 28 years of age. He plays for the Kerala state cricket team in domestic cricket. He is a right-hand batter. He plays in the team as a wicket-keeper-batter along with that he is also good at the bowling department and he bowls right-hand medium-pace bowling. He was born in Kallissery of Thiruvalla in the Pathanamthitta district of Kerala. He completed his schooling at MGM Higher Secondary School, Thiruvalla. After that, he enrolled in High School Ranni, Perunad for senior secondary school. He was then admitted to Mar Thoma College, Thiruvalla. From Mar Thoma College, Thiruvalla, he graduated with a BA in Political Science.  He played for Royal Challenger Bangalore (RCB) in the 2017 edition of the Indian Premier League.

In the 2017 Indian Premier League, Vishnu was signed to play for Royal Challengers Bangalore as a replacement for wicket-keeper-batter KL Rahul. He played only 3 matches in that season. In the next three seasons(2018,2019, and 2022) no teams had shown interest in purchasing him and he went unsold. Ahead of the 2021 Indian Premier League in the IPL auction,  Delhi Capitals bought in In February 2021. But he did not get any chance to play. For the 2022 Indian Premier League tournament, he was bought by the Sunrisers Hyderabad in the auction.

Blooket – Blooket Game, What Is, How To Play, Login, And Best Alternatives