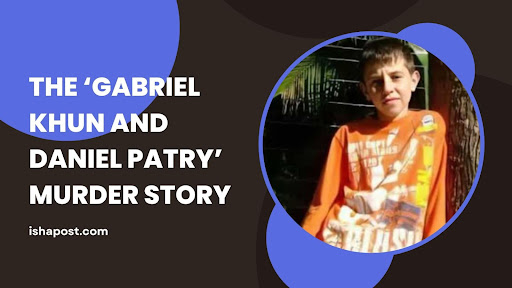 The popular murder story that we are talking about took place in the year 2007. It was a story that involved two children, one being just 12 and the other 16 years old. In this blog you will know all the harsh reality of what happened between both of these kids and how Danile Patry killed Gabriel Kuhn withinside the decision of 20,000 digital coins.

Recently, the devasting murder story of Garbriel kuhn and Daniel Patry is gaining hype and interest among various internet users. And before we get into the whole story, please note, both these children were friends and one of them was murdered by other. Also, the reason behind the sudden attention witnessed on the case is the recent facts that are being re-examined. There are things that tell how the story has a lot more to offer than one can think as the autopsy of Gabriel Kuhn just got released.
Patry was a quarrelsome and aggressive person during his teenage years. There are people believing that maybe this was what led to the muder of Gabriel Kuhn. But how and why would a teenager kill his friend? What would have led to that?

The report for Gabriel Kuhn and Daniel Patry autopsy has also become talk of the town for similar reasons. As per the sources and reports, Kuhn died of various dreadful grievances. And the autopsy pictures also reveal that the muder happened at their home. Now this raises the question of were these two alone at home? Why didn’t anyone around hear and see one murdering other? Was it all fate or a planned muder? How can a teenager plan a murder like this? In order to get answers for this all, we will request you to read the blog till the end.

Daniel Felipe Patry, the murderer of the story, was born in Blumenau, Santa Catarina, Brazil in the year 1991. During his childhood he was a disobedient, aggressive and violent child. The moment he used to get aggravated, he would react with great violence. The boy also has a history of psychiatric treatment which he always abandoned and never completed. His only love was television and later online games on the internet.
Gabriel Kuhn was also born in Blumenau in 1995. The boy was good in studies and had an obedient lifestyle. He was just opposite Patry. That Patry was four years older but because they were neighbors, they would every now and then come in contact, chat and play games together.

He met Gabriel Kuhn, the victim, while playing a game called Tibia. And later they became good friends, not just only but in person too. Garbiel Kuhn and Daniel Patry pics show that they were close and shared a few things during their friendship. And the terrible incident took place when they exchanged a huge amount of money for a game.

To understand the awful affair of Daniel Patry and Gabriel Kuhn, it is extremely important that one differentiates between true and false information. If we go through the complete situation once, we will understand how the main concern of the event was Gabriel owing money to Daniel. Though it wasn’t normal lending and paying money. Here one paid digital money to another in order to enter into the game Tibia. Kuhn and Patry lived in the locality but this game became their basis of knowing each other. It was the same game that led to the muder of one.

The digital world today has a modern framework of games. Here you have to pay digital money to buy and spend on the products inside. And something similar happened. Gabriel borrowed 20,000 digital coins from Daniel Patry and later refused to pay back. Daniel became anxious and furious about this refusal. And also for the fact that he had a mental condition, he decided to kill Gabriel. The digital money was never repaid but it costed the life of poor soul Gabriel at the age of 12.

As per reports, the victim was tortured by the harrased for over a month. One day when Gabriel’s mother was not home, Daniel went to his place and killed Gabriel. The murder was no less than the most burtual murder of that times. Daniel took a string and wrapped it around Gabriel’s neck and kept squeezing until he lost his sense. He then took out a hackshaw from the garbage and began to cut it up. Gabriel, dripping wet in blood, began to yell in pain but Patry kept cutting him like anything. Patry cut Gabriel’s right leg and when he decided to throw the dead body, Gabriel’s mother arrived. The neighbors immediately called the police and Danile was instantaneously arrested in his own home.

Gabriel Kuhn and Daniel Patry pics on Twitter reveal that though they were good friends, one can neer trust what’s on the mind. Daniel had a mental conditon and was not in his senses but still the main reason of murder was the game Tibia.

Playing online games is a trend these days. It is necessary that we as parents and caretakers take regular crunching sessions of young ones to understand their needs and thoughts. It is high time we prioritize what’s important unless it’s too late!

Read more: A Complete Guide On The Blackboard DCCCD, Aims, Function, And Login

Everything You Need To Know About John Adams Morgan

Know Everything About The Public Financial Management System Or PFMS: Scholarship, Login

3 Situations to Consider a Maritime Lawyer