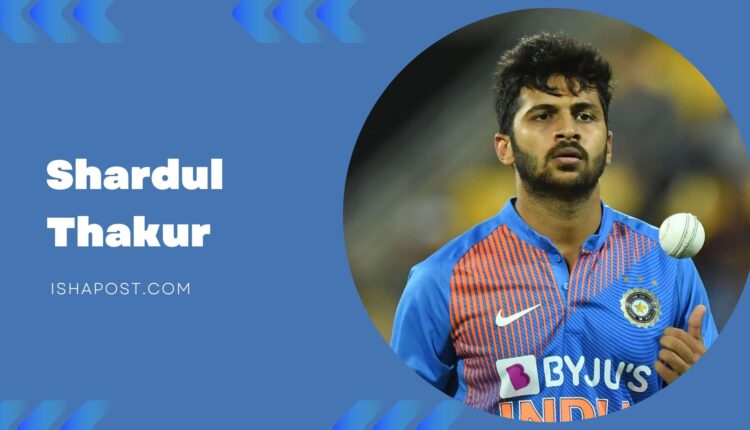 Shardul Thakur is an Indian international cricketer. He is a medium-fast bowler with many variations like a slower bowl, knuckle bowl, out swing, and in-swing. Apart from being a seasoned bowler for his team, he is also a capable right-handed batsman in lower-order.  In domestic cricket, He plays for Mumbai in first-class cricket. He was born on the 16th of October 1991. As of 2022, Shardul Thakur’s age is 30 years. He got engaged in 2022 and Mittali Parulkar will be Shardul Thakur’s wife soon.  His official name is Shardul Narendra Thakur. His place of birth is Palghar, Maharashtra, India. He is given many nicknames by his friends such as Beefy, Lord Shardul, Bhagawan Thakur, and Lord Thakur. Shardul Thakur was signed up by Tata Power Limited In February 2020 as the brand ambassador. Delhi Capitals is the Shardul Thakur IPL 2022 team.

Why is Shardul Thakur called lord?

In November 2012, he made his first-class debut for Mumbai against Rajasthan at Jaipur in the 2012-13 Ranji Trophy. He did not have a decent beginning to his profession as he took four wickets at a bowling average of 82.0 from his initial four games. He was named in India’s 16-man team for India’s Test visit to West Indies in 2016, however, he did not play. He made his One Day International (ODI) debut on 31 August 2017 against Sri Lanka. He made his Twenty20 International (T20I) debut for India against South Africa on 21 February 2018.

Fluff and Fold Service – Important Things You Need to Know