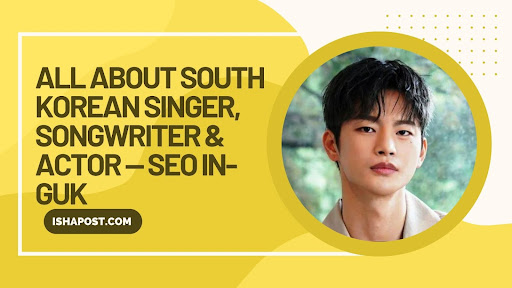 Seo In-guk was born on 23 October, 1987. He launched his singing career by winning the reality show, ‘Superstar K’ in 2009. He further made his acting breakthrough in 2012 with Reply 1997. The singer, songwriter and actor later tried his hand in various television series. And that’s how he made his way in the hearts of his viewers.

Since childhood, Seo lived with his parents and younger sister. He grew up in relative poverty as his mother worked as a recyclables collector and his father as a welder. Seo has seen many hardships while he was young. He is also a trained ssireum wrestler. He learnt boxing and mixed martial arts in school and is a Hapkido 2nd dan. Seo was 10 when he decided to become a singer, after being inspired by the Korean rock musician Kim Jung-min and watching him perform ”Sad Promise”.

Seo used to perform at family gatherings and school events to mold himself into a better singer. And he later moved to Seoul alone at the age of 20 to pursue his dream of becoming a singer despite his father’s objections.

While studying Applied Music at Daebul University, Seo auditioned for various record agencies such as JYP Entertainment and DSP Media but received no success. After repeatedly being rejected and told to lose weight, he struggled with bulimia for a time. Seo later enrolled at Kyung Hee Cyber University, Department of Information and Communication. He also pursued Master’s degrees in Performing Arts at Dongguk University and Practical Music (Composition) at Baekseok University.

8 Seo In-guk’s K-Dramas You Must Watch

Seo In-guk is a popular name among the regular K-drama viewers. He has been around in the industry for a while and has given many exceptional performances in his film career. Though he started his career as a ‘Superstar K’ winner but later proved that be it singing for OSTs for dramas, aceing rom-coms or creating suspense in mystery thrillers, he can do it all and a lot more!

Here are 8 K-dramas that made Seo popular among all.

‘Reply 1997’ is a series based on cultural phenomenon and was released in the year 2012. The series is a nostalgic throwback to the first gen era, especially k-pop. But even if you were not a big fan of k-pop, you will still fall for the love and warmth this drama has. Seo In-guk plays a ten year old character, Yoon Yoon Jae. He is shown as the other half to Jung Eun Ji’s Sung Shi Won. And both of them share a relatable friendship. Sizzling chemistry and what not.

This was an A class horror rom-com, released in 2013. ‘Master’s Sun’ is all about an electrifying chemistry between Gong Hyo Jin and So Ji Sub. The movie covers all the skinships from the first to last episode. Seo In-guk plays the character of Kang Woo, who is the second male lead. He looks dapper in the suit. He may not be the main lead in the movie but has definitely given an emotional rollercoaster ride to his viewers in this movie.

‘King of High School’ gave Seo In-guk the leading seat in 2014. As the name suggests, the movie is not set in high school but talks about a high school senior who has to pretend to be an old brother at the latter’s behest. Seo’s character is surrounded by many older people than him and the one who catches his eye is his secretary, an elder woman with a quirky personality. This breezy rom com helped people explore the funny side of Seo.

If you have already fallen for Seo and wish to see him in a period setting, you must watch ‘The King’s Face’. This one is focused on the crown prince of Joseon, Gwanghae (Seo) and how he uses his face reading tool to rise in power. The drama from 2014 is a little hard to understand but is worth watching. The character played by Seo nabbed him some year-end awards.

‘I Remember You’ made Seo In-guk step down into a much darker face. This one is a psychological thriller of 2015 that offers chilling performances all over. The criminal profiler character of Seo was something new to watch. If you love suspense thrillers then this is a must watch for you.

After trying his hands in various genres of film, Seo In-guk returned to rom com in 2016 with Shopping King Louie. This movie is everything you expect from a rom com. It has light hearted fun, believable romance and a memorable story line with poignant moments.

The Smile Has Left Your Eyes

The Smile has Left Your Eyes released in 2018. This was when Seo took a turn and dived into another darker role. The actor tends to imbue a devil-may-care attitude in the movie but still makes enough layers of vulnerability that people like him. All three leads of the movie are perfect in their roles and draw your attention in the most appropriate manner.

Doom At Your Service

This one is the latest drama starring Seo In-guk that will be released in 2021. Here the actor plays Myul Mang, a god who brings forth doom and destruction but is also tired of it. The ratings of this fantasy drama were not exceptional but we still can’t deny the wonder created by the actors. Also, they just make an adorable couple too.

Seo is one of the most loved and celebrated actors in the K-drama industry. He is someone who doesn’t let viewers take their eyes off. In case you are willing to know more about him, subscribe to our page today.

How Much Does SEO Cost?

How to Download Call of Duty on PC for Free: Full Compressed Version for PC

How to Select the Matching Couple T-Shirts Order Online?