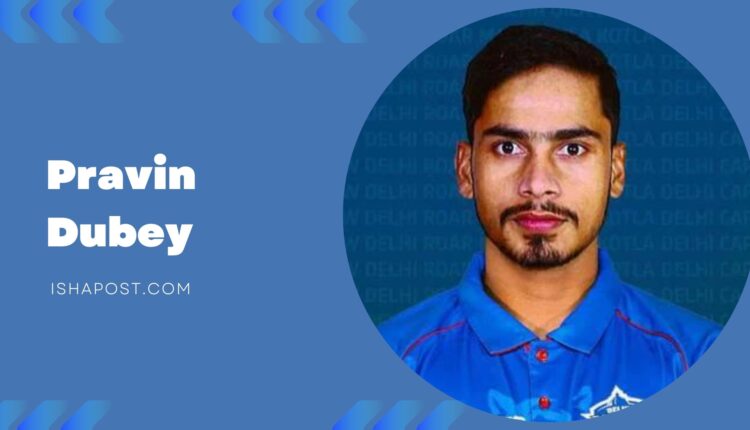 Pravin Dubey is an Indian cricketer. He was born on the 1st of July 1993. As of 2022, Praveen Dubey is 28 years old.  In domestic cricket, he plays for Karnataka. He plays cricket as a bowler. He bowls leg break googly and he is a right-handed batsman. At the 2016 IPL players auction, he was signed up by Royal Challengers Bangalore for ₹35 lakh. In the 2017 Indian Premier League, he was bought by the Royal Challengers Bangalore team for ₹10 lakh. In the 2020 edition of the tournament, he replaced the injured veteran spinner, Amit Mishra, in the Delhi Capitals.

On the 8th of January 2018, in the 2017–18 Zonal T20 League, he made his Twenty20 debut for Karnataka. He made his first-class debut for Karnataka in the 2019–20 Ranji Trophy on 11 January 2020. Delhi Capitals named 27-year-old uncapped leg-spinner Pravin Dube as a replacement for Amit Mishra who was ruled out of IPL 2020 with a finger injury. In February 2022, he was bought by the Delhi Capitals in the auction for the 2022 Indian Premier League tournament.

He played two matches for Karnataka in the 50-over Vijay Hazare Trophy in the 2015-16 season. At the IPL 2016 players auction he was purchased by Royal Challengers Bangalore for INR 35 lakh by then he had not made his first-class debut.

Fans often confuse that Pravin Dubey and Shivam Dube are brothers. But it is not true. They are not related to each other. The only common thing about them is their surname and the fact that they played the same game which is cricket. Pravin Dubey plays for the Karnataka team in the Ranji Trophy tournament whereas Shivam is playing for Mumbai in domestic circuits.

IFOVD: What is It, How to View, and Everything You Need to Know